This paper adds good new knowledge on the mechanisms by which exercise influences cancer biology and outcomes.

PURPOSE: The randomized controlled OptiTrain trial showed beneficial effects on fatigue after a 16-week exercise intervention in patients with breast cancer undergoing adjuvant chemotherapy. We hypothesize that exercise alters systemic inflammation and that this partially mediates the beneficial effects of exercise on fatigue.
METHODS: Two hundred and forty women scheduled for chemotherapy were randomized to 16 weeks of resistance and high-intensity interval training (RT-HIIT), moderate-intensity aerobic and high-intensity interval training (AT-HIIT) or usual care (UC). In the current mechanistic analyses, we included all participants with >60% attendance and a random selection of controls (RT-HIIT=30, AT-HIIT=27, UC=29). Fatigue (Piper Fatigue Scale) and ninety-two markers (e.g. IL-6, TNFalpha) were assessed at baseline and post-intervention. Mediation analyses were conducted to explore whether changes in inflammation markers mediated the effect of exercise on fatigue.
RESULTS: Overall, chemotherapy led to an increase in inflammation. The increase in IL-6 (pleiotropic cytokine) and CD8a (T-cell surface glycoprotein) was, however, significantly less pronounced following RT-HIIT compared to UC (-0.47 (95%CI -0.87;-0.07) and -0.28 (-0.57;0.004), respectively). Changes in IL-6 and CD8a significantly mediated the exercise effects on both general and physical fatigue by 32.0% and 27.7%, and 31.2% and 26.4%, respectively. No significant between-group differences in inflammatory markers at 16 weeks were found between AT-HIIT and UC.
CONCLUSION: This study is the first showing that supervised RT-HIIT partially counteracted the increase in inflammation during chemotherapy, i.e. IL-6 and soluble CD8a, which resulted in lower fatigue levels post-intervention. Exercise including both resistance and high-intensity aerobic training might be put forward as an effective treatment to reduce chemotherapy-induced inflammation and subsequent fatigue. 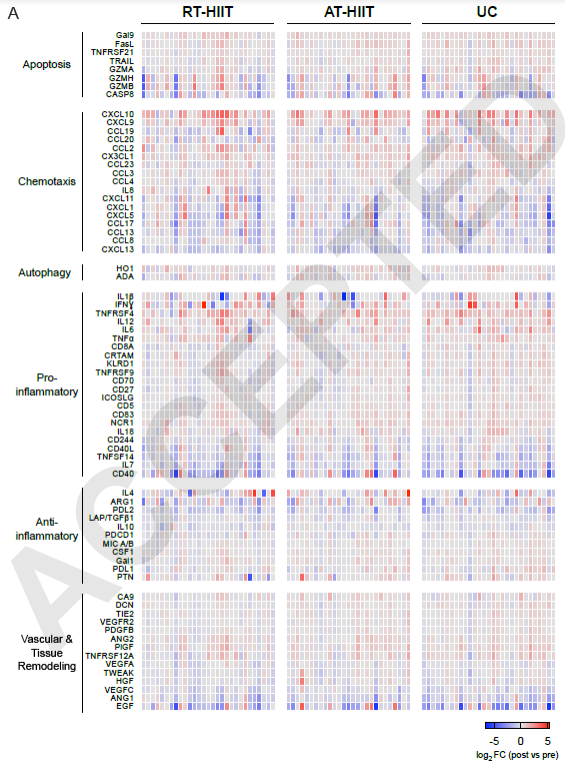