An increasing number of studies indicate that exercise plays an important role in the overall care of prostate cancer (PCa) patients before, during and after treatment. Historically, research has focused on exercise as a modulator of physical function, psychosocial well-being as well as a countermeasure to cancer- and treatment-related adverse effects. However, recent studies reveal that exercise may also directly influence tumour physiology that could beneficially affect the response to radiotherapy.

In this narrative review, we provide an overview of tumour vascular characteristics that limit the effect of radiation and establish a rationale for exercise as adjunct therapy during PCa radiotherapy. Further, we summarise the existing literature on exercise as a modulator of tumour perfusion and hypoxia and outline potential future research directions.

Exercise is a potentially promising adjunct therapy for men with PCa undergoing radiotherapy that may increase its effectiveness. However, exercise-induced tumour radiosensitisation remains to be confirmed in preclinical and clinical trials, as does the optimal exercise prescription to elicit such effects. 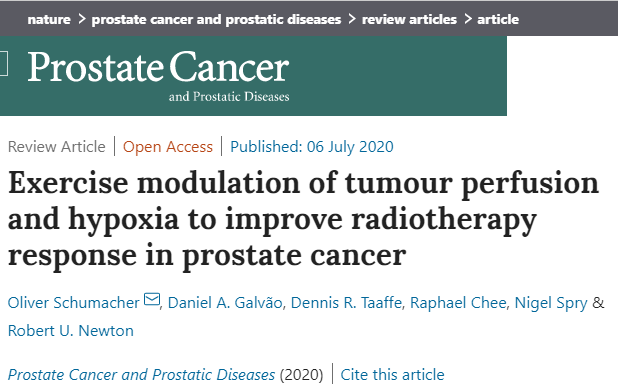